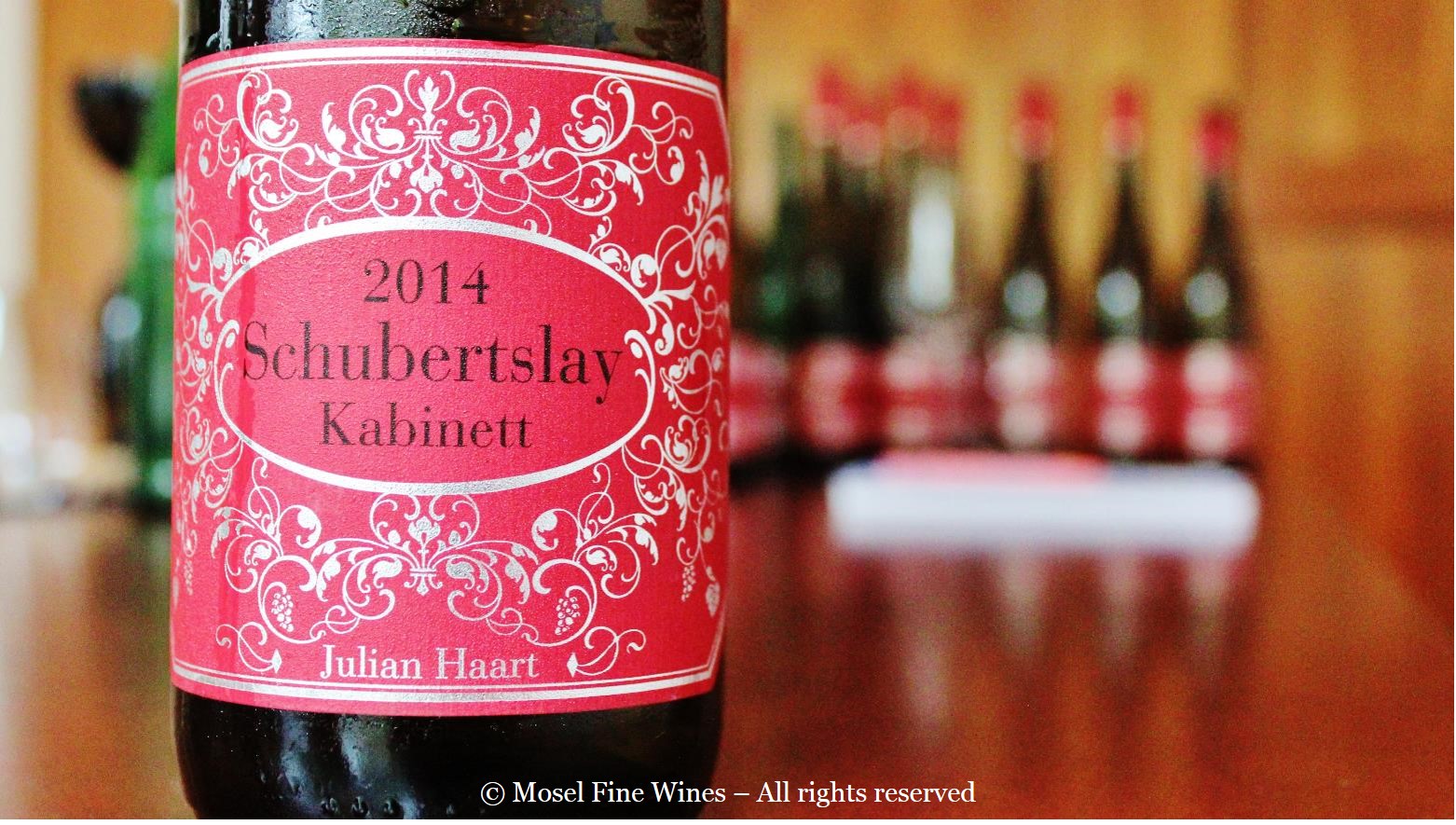 The 2014 vintage yielded some stunning Kabinett wines, including this glorious highlight from our 2014 Vintage Report Part I.

The Mosel Vintage 2014 proved a remarkably contrasted vintage with true strokes of genius right next to the ordinary (to remain polite). Never have we experienced such a huge diversity in quality and style as in 2014.

But the vintage had one major strength, at least for the successful ones: It produced some stunning Kabinett wines, which are among the finest since the 1990s. This includes a stunning Piesporter Schubertslay Riesling Kabinett by Weingut Julian Haart, which is just plain elegance and playfulness.

Julian Haart | A Household (Fore)Name in a Record Time

A sibling of the famous Haart family in Piesport (he is related to Johannes Haart from Weingut Reinhold Haart, though most closely through their respective mothers’ side rather than through the Haart line), young Julian Haart managed to make a (fore)name for himself in a record short amount of time, turning out some stunning wines right from his 2010 debut vintage (see Issue No 16 (Jun 2011) for the Estate Review of his first vintage). It is no surprise that this Estate's wines regularly made it as Wines of the Month, including its 2013er Wintricher Ohligsberg Spätlese in July 2014.

Weingut Julian Haart produced an absolutely amazing collection of wines in 2014. He partially puts the success also to the quality of his holdings: “The Piesporter hill in particular withstood the elements surprisingly well and the grapes ripened smoothly, with moderate acidity. This meant that we could start our harvest early, i.e. before the rain." This obviously paid off!

The Estate extends today over more than 4 ha of vineyards today, with prime holdings in the Wintricher Ohligsberg and on the Piesporter hill. This includes a parcel in the Schubertslay vineyard (see picture here below), which is tucked inside of the Piesporter Goldtröpfchen, above the village of Ferres, on a very steep part of the hill facing nearly due south.

Julian Haart crafted some superb wines from this vineyard in 2014. We feel in love with the Schubertslay Kabinett, which manages to be playful and yet packed with flavors, much in the style of the great Spätlese from the 1990s!

A review of the 2014 Julian Haart wines can be found in Part I of the 2014 Vintage Report published in Issue No 28 (June 2015). This Issue is available to subscribers on simple request. Not yet a subscriber? You can become one, free of charge, by simply registering yourself here below.

This rather shy expression of white fruits, laurel, spices and minerals really only shows its full potential on the palate at this stage. Despite packed with flavors, the wine only seems to dance on the palate as glorious scents of fruits are blending into a crisp but superbly playful acidity. This all leads to a real Kabinett feel in the gorgeously long and focused finish. This is already stunning now but we would not be surprised if it freshens up even further with bottle age and turn into a real classic at maturity. 2024-2039+

See all other wines of the month >>>