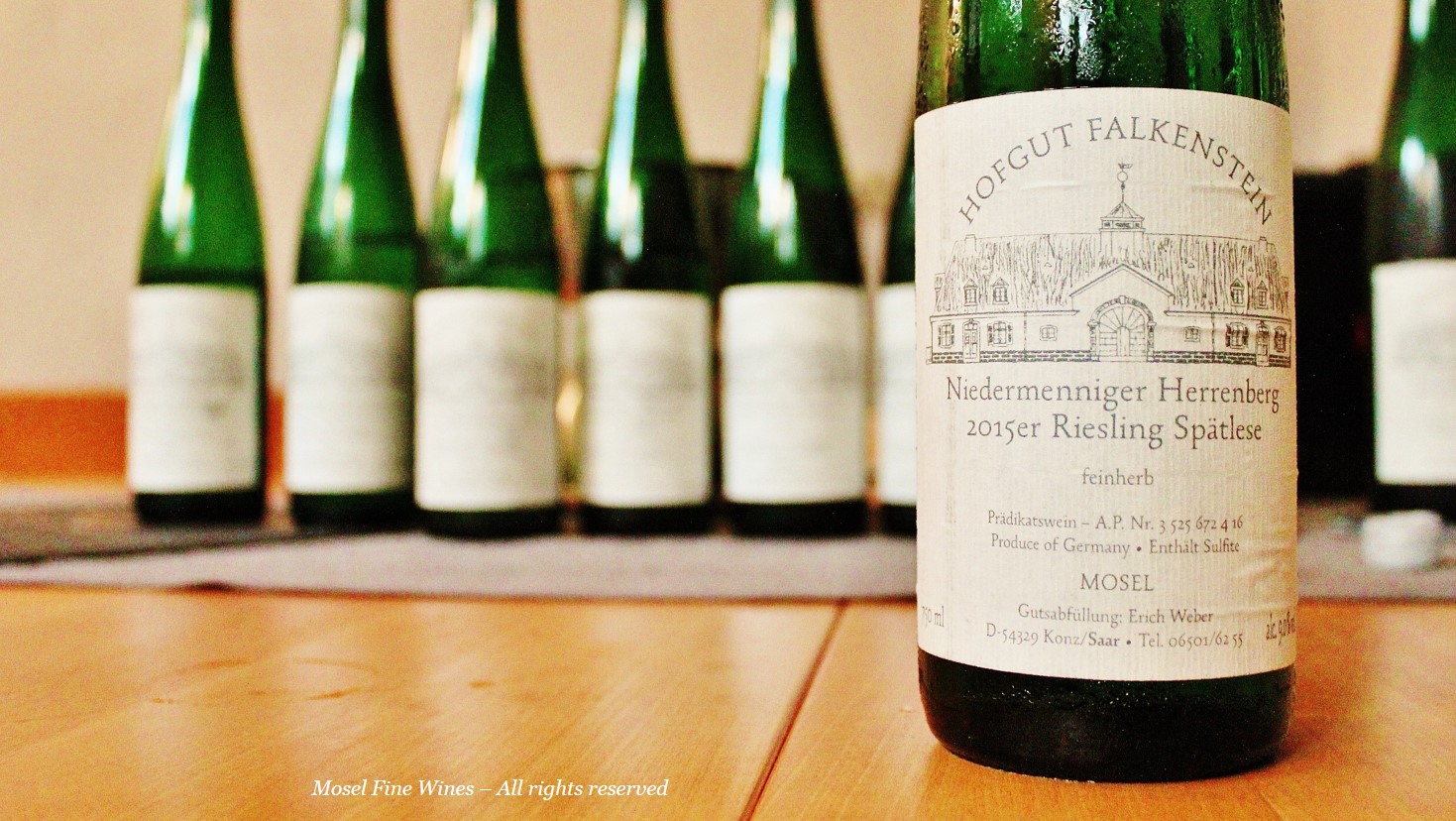 A magical off-dry Spätlese hones in on how well Hofgut Falkenstein nailed the potential of the 2015 vintage.

Few vintages have been so hyped than 2015 and there is some truth in it. 2015 yielded some stunning wines, and this in all stylistic directions.

But not everything that shines is gold. At its heart, 2015 is a ripe vintage, pepped up by glorious zest, with many wines on the powerful side. Only the very best wines will turn into classics in a decade or two.

The stunning 2015er Niedermenniger Herrenberg Spätlese Feinherb AP 4 crafted by Hofgut Falkenstein is set to be one of these classics in the off-dry style.

The Hofgut Falkenstein is a small family affair tucked away in a side valley of the Saar known locally as the Konzer Tälchen. Erich Weber set up his Estate in 1981 with holdings from his mother, a girl from Krettnach, as well as from the Falkensteiner Hof Estate, which he managed to acquire from the Friedrich-Wilhelm-Gymnasium. He increased the Estate over the years and oversees today 9 ha spread over Niedermennig, Falkenstein and Krettnach. His son Johannes has joined him since a few years. 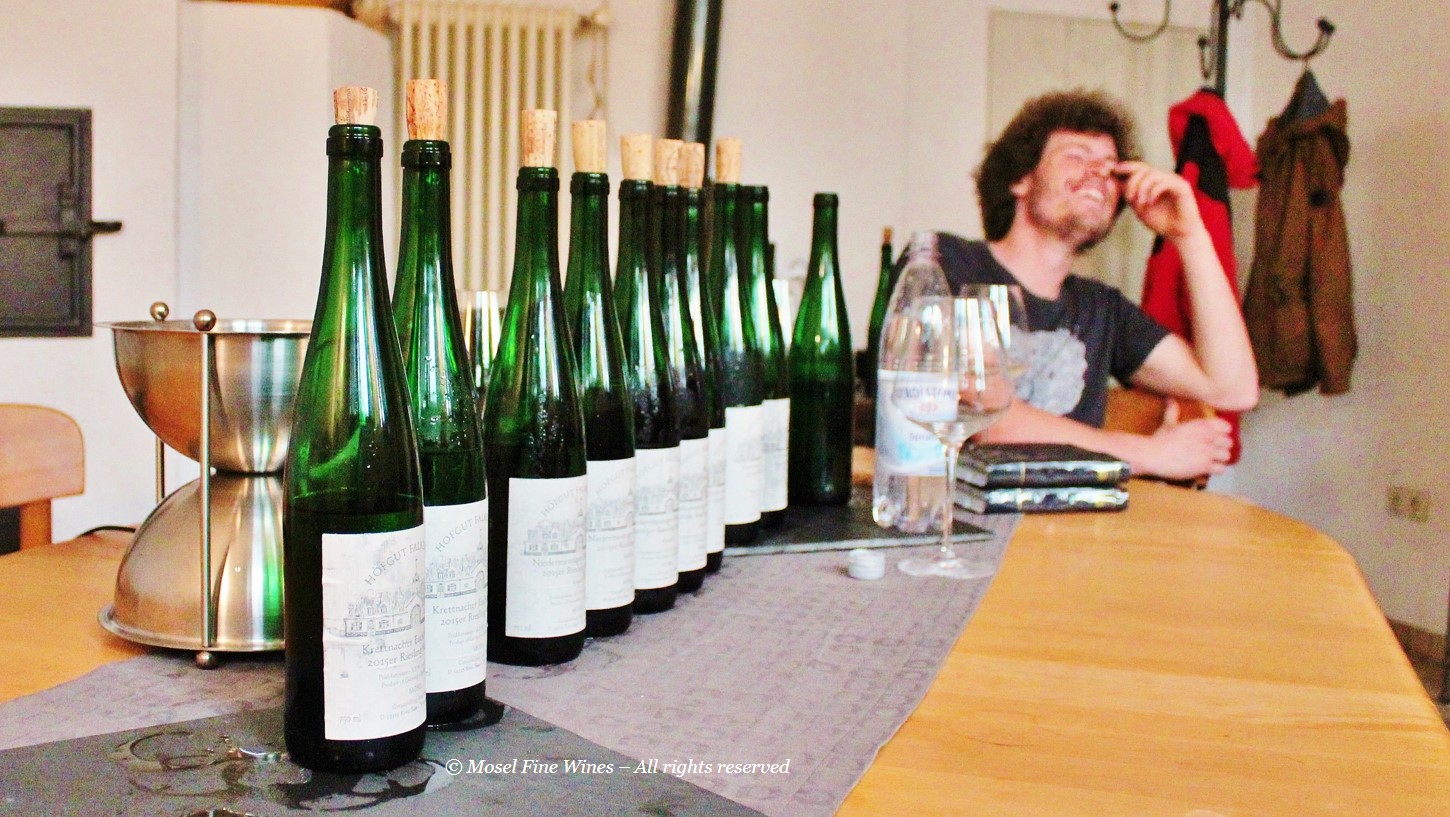 Erich and Johannes are some of the most passionate and engaging personalities in the world of wine. They love terroir and viticulture and their vineyards are their garden. Over the years, the Weber have managed to acquire some stunning holdings in some of the most revered terroirs of the Mosel in the heydays of the late 19th century. Most of them are “dark red” on the old taxation maps.

The Weber also firmly believe in traditional winemaking, in line with their motto: “We do nothing, except controlling the processes.” There is no pre-fermentation maceration and the wines are fermented with ambient yeasts and only in traditional cask. Don’t even bother asking about enzymes, additives, etc. Winemaking is kept simple but effective. 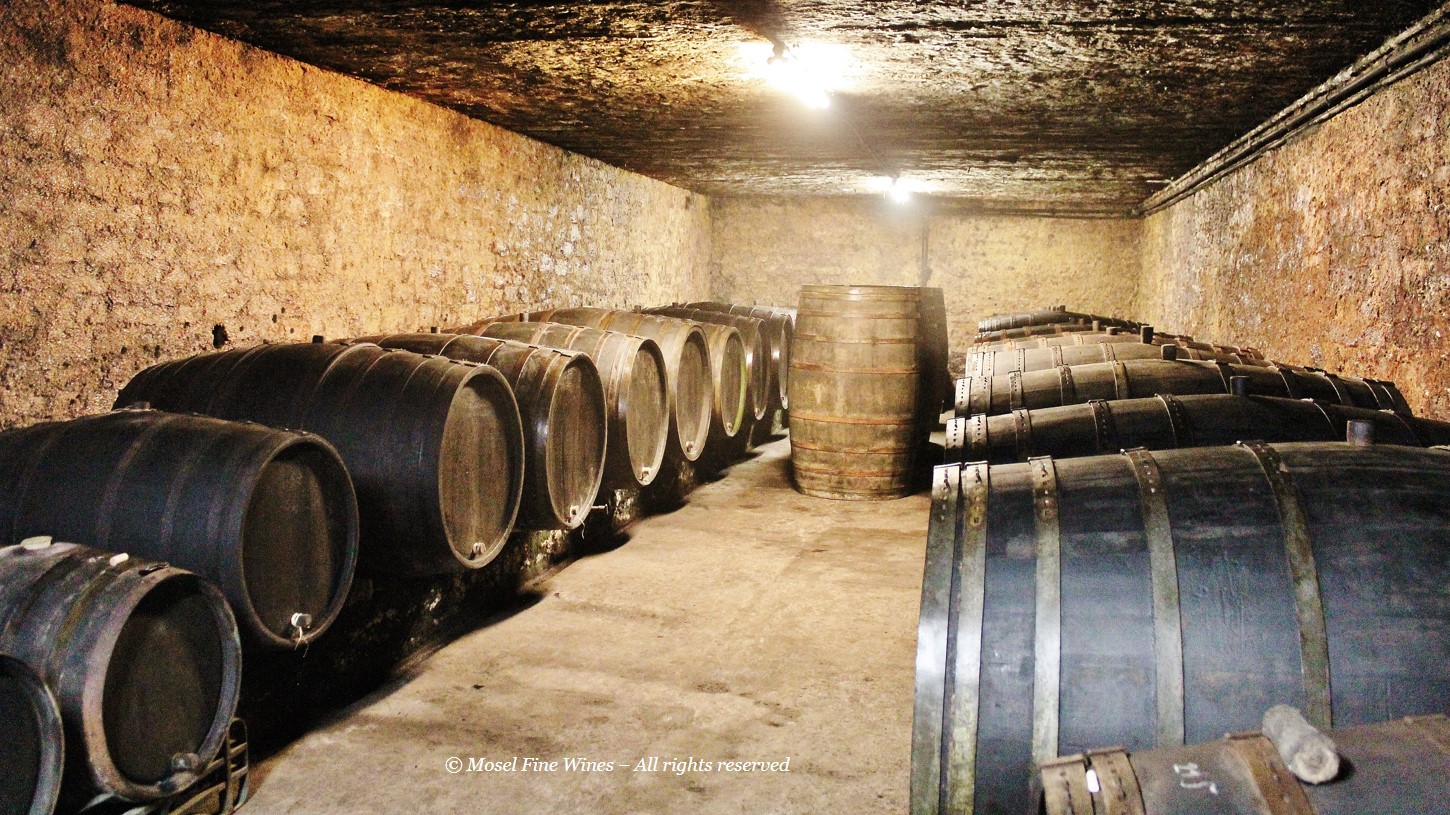 The House style is one of elegance and lightness but also of steely Saar crispness. This suits the slightly broader structure brought by the terroir of the Konzer Tälchen perfectly. It is therefore not surprising that its wines, in particular the off-dry Riesling, are among the finest of the region. Yet the Estate is still comparatively unknown in many parts of the world. We have a hunch that this will change very soon.

One of the prides of the Estate is its holdings in the Niedermenniger Herrenberg, a south to south-west facing vineyard characterized by a thin layer of soil on iron rich grey slate. The Estate was able to snatch up some prime parcels, including one from the Weingut von Kesselstatt, in what was known before 1971 as the Zuckerberg (on the right and above the “blue” – newly planted – parcel on the picture here below). Part of these holdings are still planted with very old vines. 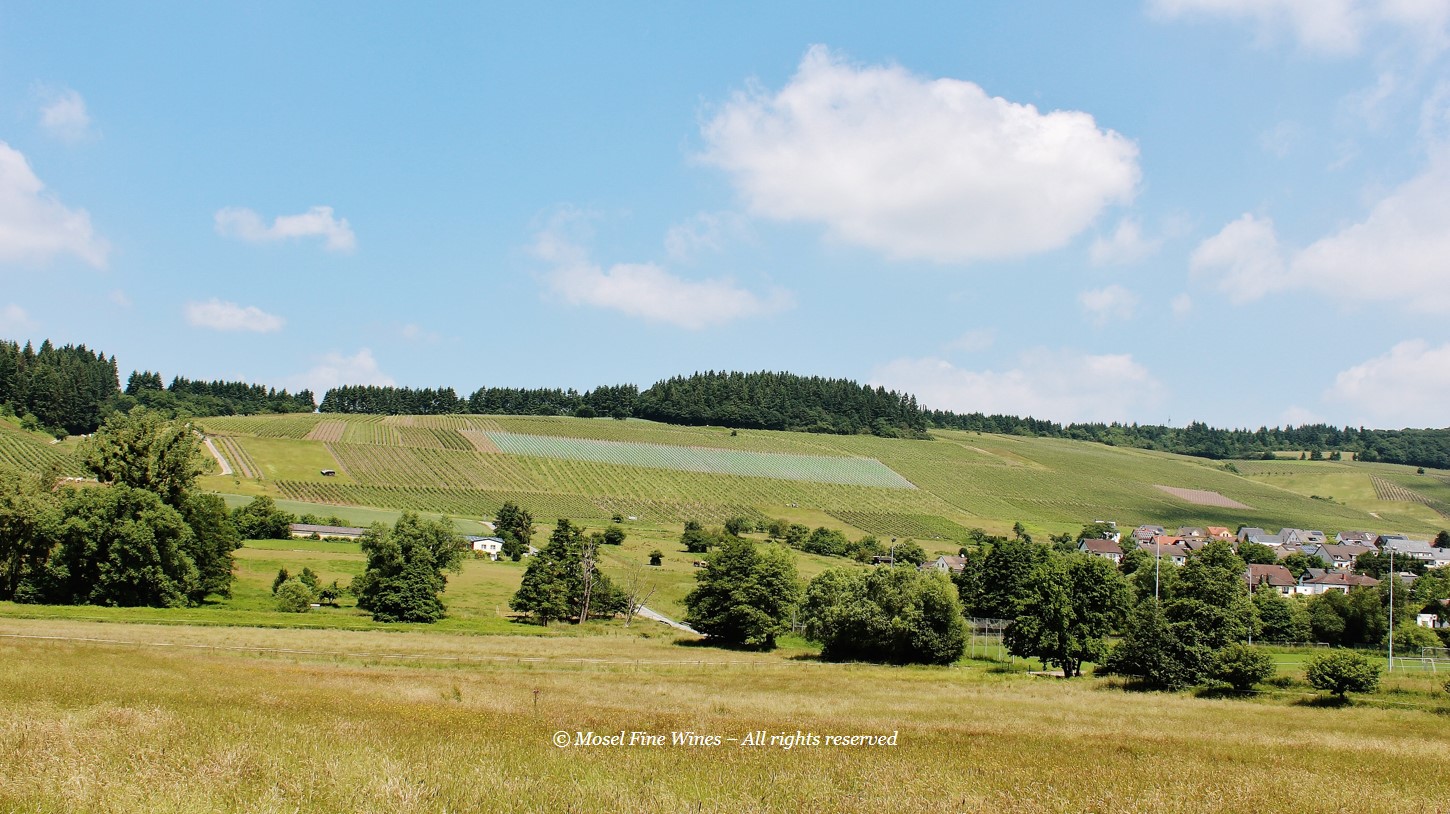 Hofgut Falkenstein bottles its wines the traditional way, i.e. cask by cask. This means that there may different bottlings of the same wine, which only differ by the AP number.

In 2015, the Estate produced four different bottlings of Niedermenniger Herrenberg Spätlese Feinherb, which only differ by the AP Number. Invariably, one bottling ends up being the better one. In 2015, it is the "AP 4", which comes from old un-grafted wines in the Zuckerberg sector.

This wine proves simply mindbogglingly good as the elegant and lighter style favored by Hofgut Falkenstein perfectly harnessed the underlying rich and ripe side of the 2015 vintage.

Should this particular cask not be available in your region, despair not: Overall, the Estate has possibly had its greatest vintage so far 2015 vintage. All four casks of Spätlese Feinherb from the Niedermenniger Herrenberg are superb (as are many other wines from the portfolio). This Estate is slowly but surely establishing itself as one of the super-stars of the Region!

The complete stunning 2015 collection by Hofgut Falkenstein was reviewed in Mosel Fine Wines Issue No 31 (Jun 2016). You are a subscriber and miss this Issue? Simply send us a request by email and we will be happy to send you a copy. You are not yet a subscriber and wish to get this Issue? Subscribe free of charge by registering yourself here below and ask us for a copy by email.

The Estate bottled four different casks of Niedermennig Herrenberg Spätlese Feinherb in 2015, whose labelling only differs by the AP number. This AP 4 is made from a parcel in the south-facing Zuckerberg sector still planted with un-grafted vines. This backward effort only gradually reveals a great sense of freshness, with stunning white peach, wet slate and herbs eventually coming through and playing havoc with one’s senses. A touch of smooth silkiness adds the elegance on the palate. The finish is zesty and airy. One is left with a seemingly forever lasting after-taste of peach, white mint and minerals. This backward beauty in a huge success but it will only reveal its full potential after a few years of bottle age. What a wine! 2020-2030