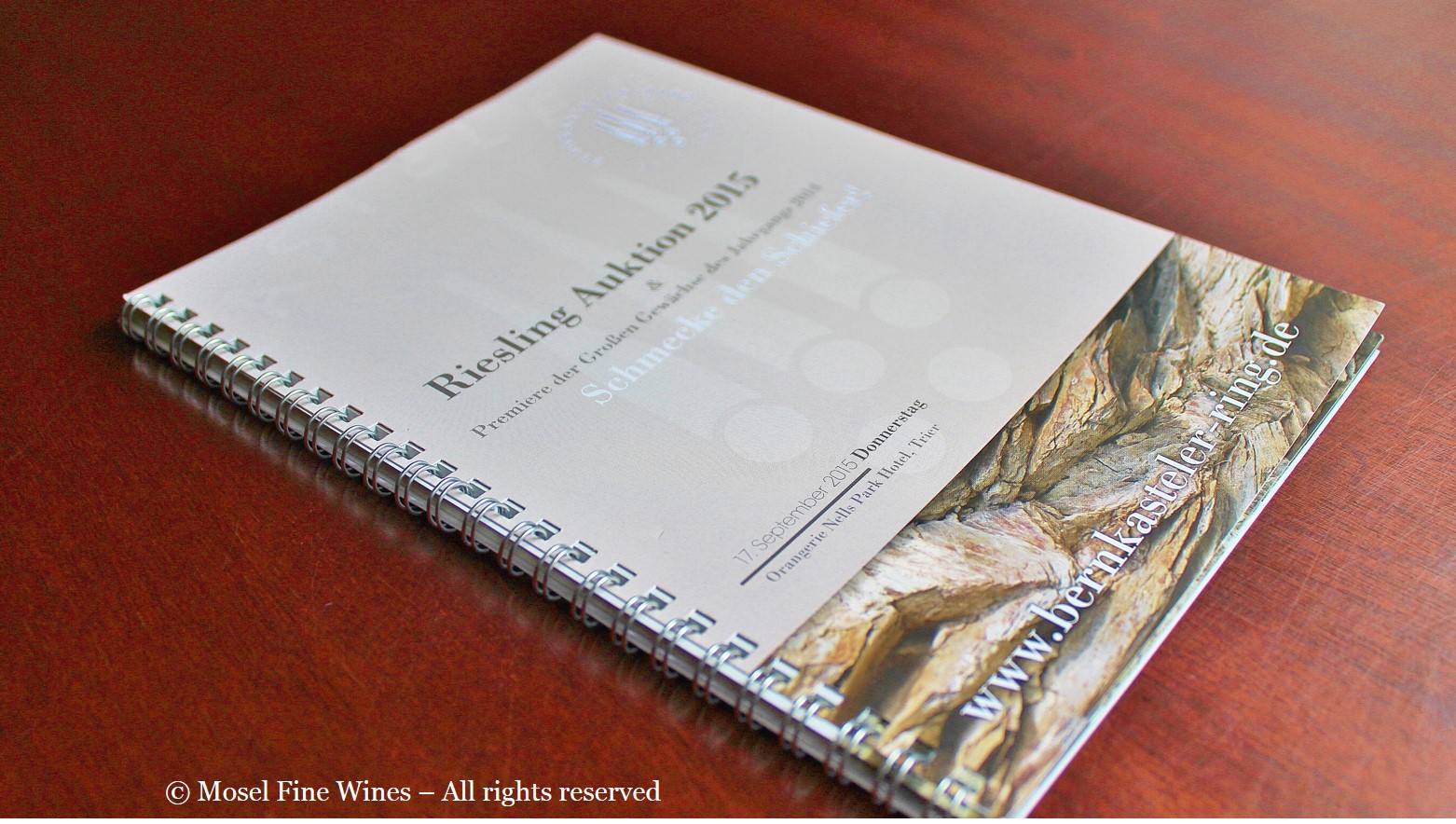 A look-back at the 2015 Bernkasteler Ring Auction, which yielded no record breaking price but was filled with gorgeous affordable wines at all levels.

Every year, member Estates of the Bernkasteler Ring sell some of their most prized wines via an Auction held in Trier. This year's Auction was held on September 17, 2015 following a century old tradition: Tasting in the morning and a wet Auction in the afternoon (wet ... because the wines are poured again when they are being sold off).

With one exception, the dry and dry-tasting wines proved reasonably prices. This includes two of our favorites, namely the impressive 2013er Winninger Uhlen Schieferformation Laubach by Weingut Richard Richter, whose 2014 wines fared very well – see Mosel Fine Wines Issue No 28 (Jun 2015) – went for €23 and the 2013er Bremmer Calmont Calidus Mons by Weingut Reinhold Franzen, whose 2013er Bremmer Calmont Riesling GG was our wine of the month earlier this year, which went for €26. Both wines are aged extensively on their lees and only bottled 18 months after the vintage.

The Spätlese proved particularly reasonably priced, in particular the traditionally made Wiltinger Klosterberg Spätlese by Weingut Peter Neu-Erben, which went for a “staggering low” €11!

However, also our other favorite Spätlese from this Auction (among which the ones by Weingut Dr. Pauly-Bergweiler, Weingut Bastgen and Weingut Erben von Beulwitz) went for comparatively fair prices.

In the “light drinking Auslese” style, the gorgeous 2014er Wiltinger Klosterberg Auslese by Weingut Johann-Peter Reinert, an Estate which proves a regular highlight at the Auction and whose 2004er Wiltinger Schlangengraben Auslese (Auction) was a wine of the month last year, went for only €20.

Among the BAs and TBAs, the 2011er Graacher Himmelreich BA by Weingut St. Nikolaus-Hospital, a wine which we see as a classic in the making (see our Guide to the 2015 Bernkasteler Ring Auction), proved the best buy as it went for a meagre €65 per half-bottle. 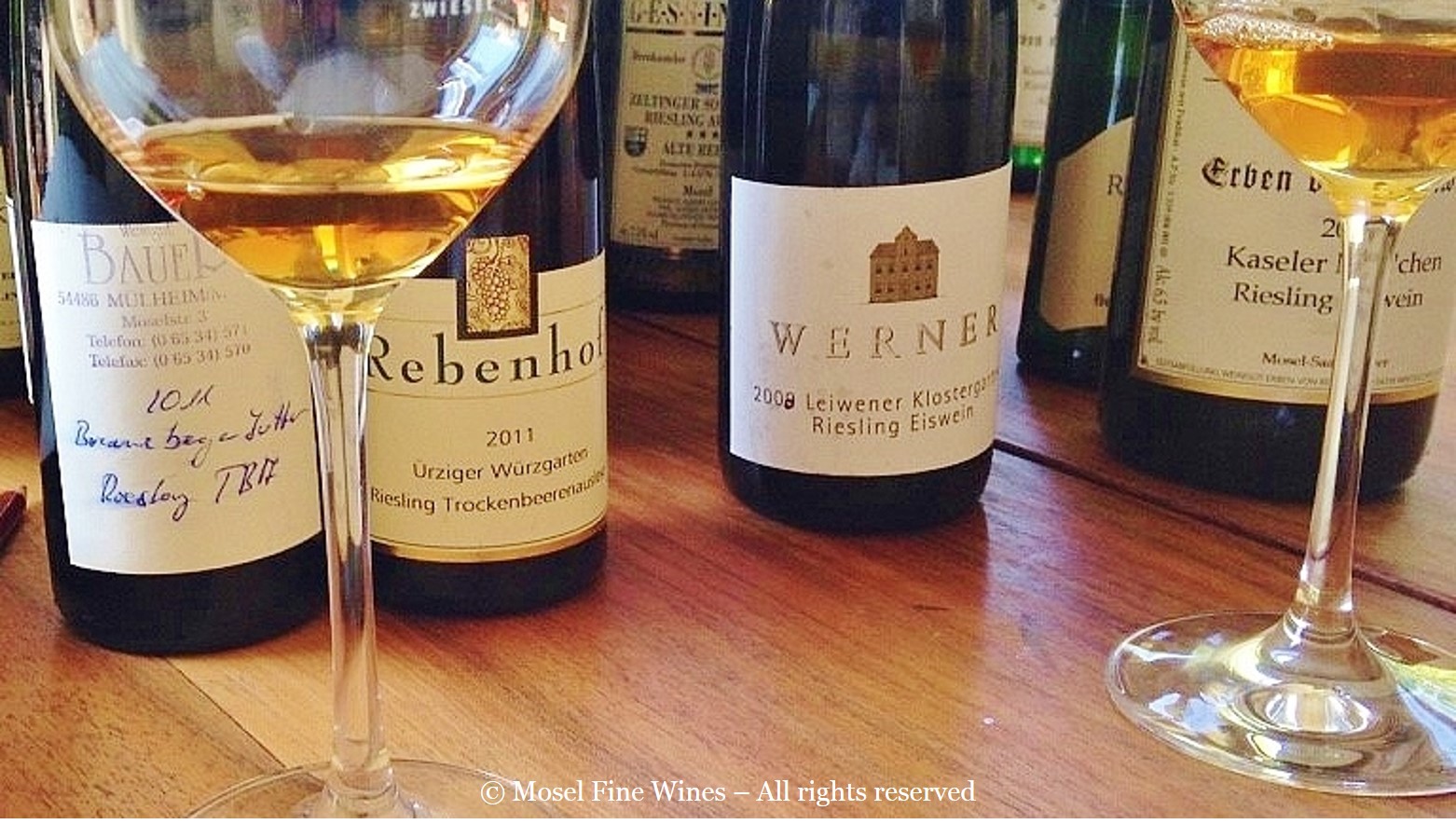 However, also the other BAs on offer proved comparatively fairly priced, given the quality of the wine and the efforts require to produce them.

In summary, the Bernkasteler Ring nicely confirmed its reputation of a source of choice for great wines at affordable prices.

The detailed list with all Auction results can be found on the website of the Bernkasteler Ring (please note that the prices indicated on the site are those for German private consumers, i.e. based on German VAT rates, for an equivalent 75cl bottle – even if the wine was only sold in 37.5cl).

An overview of all hammer prices and a detailed look-back at the Auction can be found in the Mosel Fine Wines Issue No 29 (Oct 2015), which also includes Part II of our extensive 2014 Vintage Report.

Note: We refer in this article to the hammer price (i.e. before commission fees, sales tax and any shipping costs), as these additional costs may depend on the region in which the buyer of these wines lives.

An introduction to the Auctions >>>

A great wine sold at the 2014 Bernkasteler Ring Auction >>>