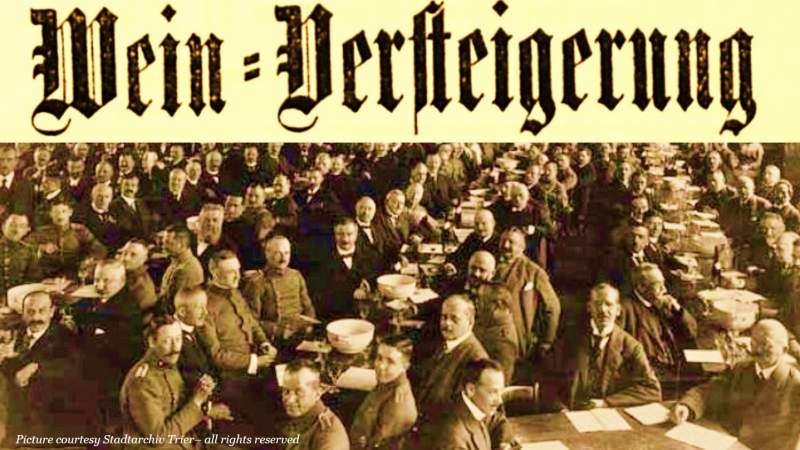 Annual Auctions | An Introduction to a German Wine Tradition

Every year, some of the finest German wines are sold at annual Auctions held as of this year in November. Here some background information on these events rooted in tradition.

Annual Auctions | How Did They Come About?

In the 19th century (but also already before), many leading growers started to sell their casks via Auctions, essentially as an efficient manner to capture value vs. the increasingly powerful wine merchant houses. These Auctions were typically held in spring, but often also in Autumn.

These Auctions became so popular that wine journals of the period would publish whole calendars indicating which Estate was selling what, where, and when. The excerpt from the Weinmarkt journal of 1883 shows that these auctions were held throughout "Wine Germany" (including in Neustadt, Mainz, Würzburg, Trier, etc.), and concerned mostly casks of the latest vintages (1881er and 1882er in this case). 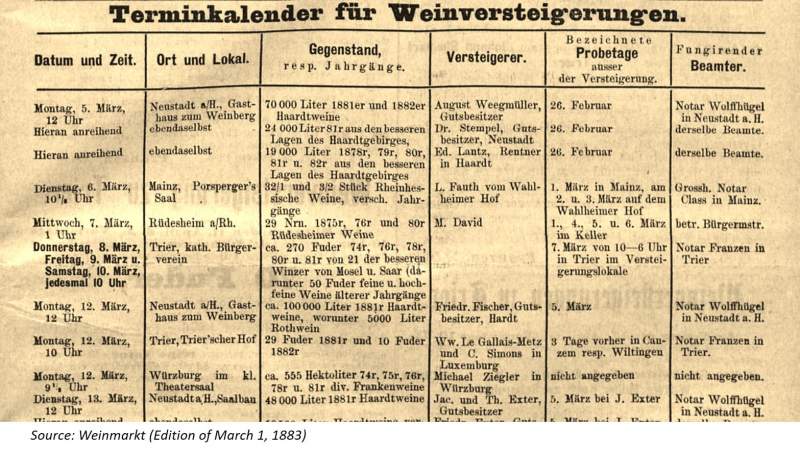 These Auctions gradually structured around grower associations by the turn of the 20th century, also to improve the traceability of the wines (remember that the first German wine law only dates from 1892 and that the provision that “wine results from the fermentation of fresh grapes” was only made in 1909).

Until the middle of the 20th century, Auctions were to be the standard approach for selling wines by many of the leading growers in the Rhine valley, whereby commissioners would act as middlemen, also to split up casks between bidders.

Annual Auctions | What Is The Current Set-Up?

With the development of Estate bottling and direct sales, the Auctions became an annual event focused on selling off selected high-quality and rare bottlings.

Two grower associations emerged in the Mosel: The Bernkasteler Ring and the Grosser Ring / VDP Mosel. Each organize an annual Auction of wines from its members in Trier. In parallel, the Auction organized by the VDP Nahe in Bad Kreuznach was gradually opened up to members of the VDP Ahr, Pfalz, and Rheinhessen.

For decades, these Auctions were held on three subsequent days in September. As of 2021 (this year), the Auctions were moved in November (among others to avoid colliding with the ever earlier harvests), still on subsequent days. The new schedule starts with the Bernkasteler Ring on the second Thursday of November, followed by the VDP Trier Auction on the Friday, and the VDP one in Bad Kreuznach on the Saturday.

Annual Auctions | Which Wines Are Sold at These Events?

The vast majority of the wines brought to these Auctions are special wines (not sold via traditional sales channels) made from particularly prized parcels or the result of painful selections.

In addition, some Estates may bring some mature rarities or large format bottles from wines which are sold via regular channels.

We have been avid buyers of auction wines ourselves for many years now as these bottlings can represent the pinnacle of Riesling greatness. Simply put: Not all auction wines are magical but a vast number of our greatest Riesling memories have come from auction wines (at least from those Estates that are members of these grower associations).

These wines are not cheap and auction wines often sell at a significant premium, even if some comparative bargains can regularly be made (in particular at Auslese level, which are often small BAs and TBAs).

Whether the premium and effort involved is worth it is a very personal one. Simply put, the Auctions are probably an overkill for anyone interested in good QPR daily drinking. However, we would strongly recommend anyone interested in the “best of Riesling” (with price not being a prime factor) to have a look at what is on offer!

Private individuals as well as professionals can participate to these Auctions by putting in bids with accredited commissioners (who still broker these sales). Prior to bidding, we strongly advise to contact one of these commissioners to clear possible import and / or duties issues into your country.

Details on these events (including contact details of commissionners) can be found on the websites of the organisations:

Auction bottles do not necessarily need to be acquired at the Auctions themselves, some Estates and wine merchants / importers offer them also later as well.

In principle, all auction bottles carry a round sticker (see below) to distinguish them from regular ones.

In practice, not all bottles, especially older ones from the 1980s and 1990s, do carry a sticker. In such a case, often only the AP numbers can help out to identify auction wines. AP numbers may not be very consumer friendly but a little effort may allow one to make some bargains on the secondary market. Readers not familiar with AP numbers can learn more about it here.

Mosel Fine Wines | Comprehensive Guide AHEAD of the Auctions

Not everyone can attend the Auctions and taste for him or herself. To help wine lovers throughout the world, Mosel Fine Wines has been publishing a complete guide AHEAD of the Trier Auctions since 2009. We also provide some tasting notes AHEAD of the Bad Kreuznach Auction.

This Auction Guide is published in the November Issue. It includes all practical information to the upcoming events (dates, set-up, list of commissioners, etc.) and, above all, detailed tasting notes for recommended wines on offer.

This August Issue (currently Mosel Fine Wines Issue No 59) is available to all subscribers on simple email request.