The latest pest now also in the Mosel

We provide here an introduction to KEH, a pest which wine lovers may hear their favorite winemakers complain about more frequently often in the coming years. 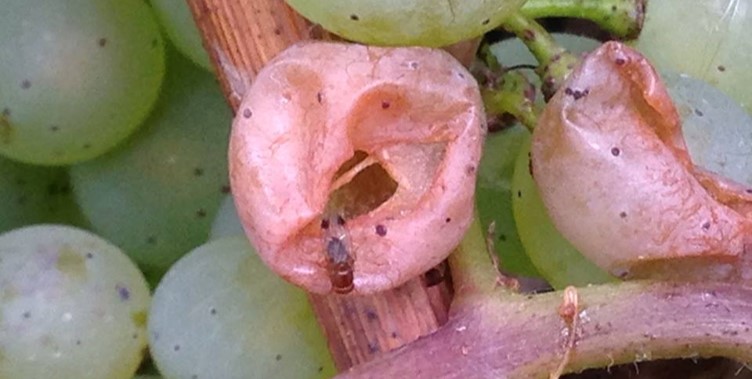 The Japanese fruit fly has been affecting European vineyards already for years. It poses massive problems to winemakers:

This fruit fly is known in Germany as Kirschessigfliege or, in short, KEF.

So far, this fly was mostly seen in southern regions. This includes Southern Germany, where it creates havoc in particular in red berry varieties such as Trollinger..

The pest has also made its appearance in the Mosel since a few years. It has been particularly present this year, where the early ripening led to softer grape skin.

“Fortunately”, in principle, it does not affect Riesling (well at least so far?) as its skin is too thick ... unless the grape was attacked, here by a wasp. Then the fly has an easy game as you can see on the picture shared by Daniel Vollenweider from one of vineyards in the Wolfer Goldgrube.

However, it poses an increasing problem to red grape varieties. Stefan Steinmetz from the Günther Steinmetz Estate estimates that possibly 20% of his Pinot Noir grapes are affected this year.

Jokingly, we could argue that the gods send mankind a clear signal that Riesling is better than other grapes. But quite frankly, our first thought was exactly what one winemaker told us: “As if we really needed another pest ...”

A beautiful picture by Daniel Vollenweider >>>

A superb Spätlese by the Vollenweider Estate >>>