An Update on the new Law provision regarding Gewann Name / Katasterlage

Already 20 Gewann names have been registered so far. Does it matter? Yes, because these are, de facto, potential new single vineyards. 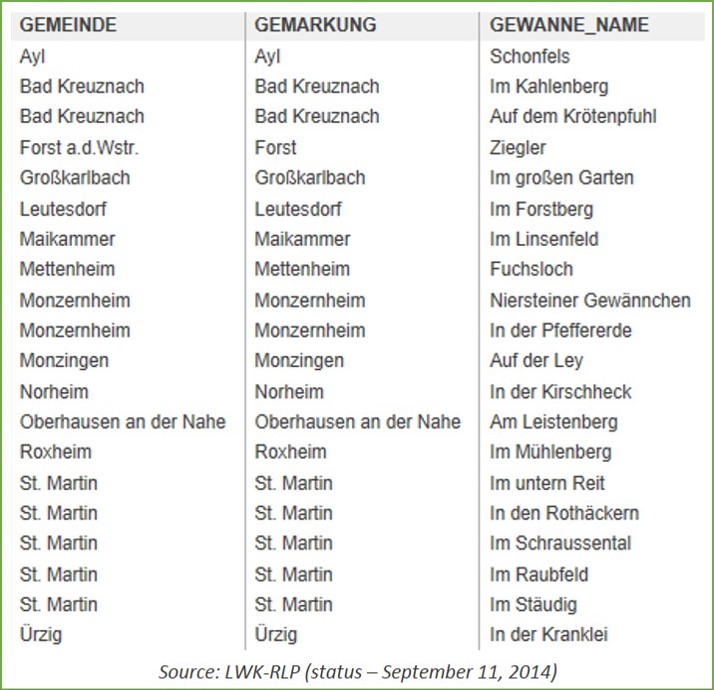 A change in the German wine law came into effect in Rhineland-Palatinate on August 1, 2014. A new provision in the law now allows to mention the name of a “Gewann” (the equivalent of Lieu-Dit, i.e. sub-plots within the current set of vineyards) on a wine label. We provided some advance information about this development in our article "Gewann Names allowed in Rheinland-Pfalz".

Already 20 Gewann names have been registered so far, as you can see on the list (here below) which the authorities just published. What does this mean and what does this imply? Actually quite a lot, because de facto these are all new single vineyards.

As you can see from the list and as we expected, Peter Lauer and Vols have have registered the Gewann Schonfels, thereby formalizing a practice tolerated since a few years. But it is above all the Nahe, among which the well-known Dönnhoff and Emrich-Schönleber Estates, which have gone full blast on this new labelling possibility.

These “Gewann” names can be used either in conjunction of the vineyard name or without it. Let’s take the example of the last one, the “in der Kranklei”. As of next year, those winemakers which own a parcel in this “Gewann” will be able to sell its produce as either “Ürziger Würzgarten in der Kranklei” or simply as “Ürziger in der Kranklei”. In the case of the latter, from a consumer’s perspective, this is akin to a new single vineyard (BTW, a very good one, the Kranklay is a sector just next to the Prälat in which, among others, Karl Erbes, Dr. Hermann and Joh. Jos. Christoffel Erben own parcels).

We will provide more information as we will get it. We will also publish a full review in a detailed background article called "Understanding the vineyard classification" to be included in the Issue No 26 (Oct 2014).