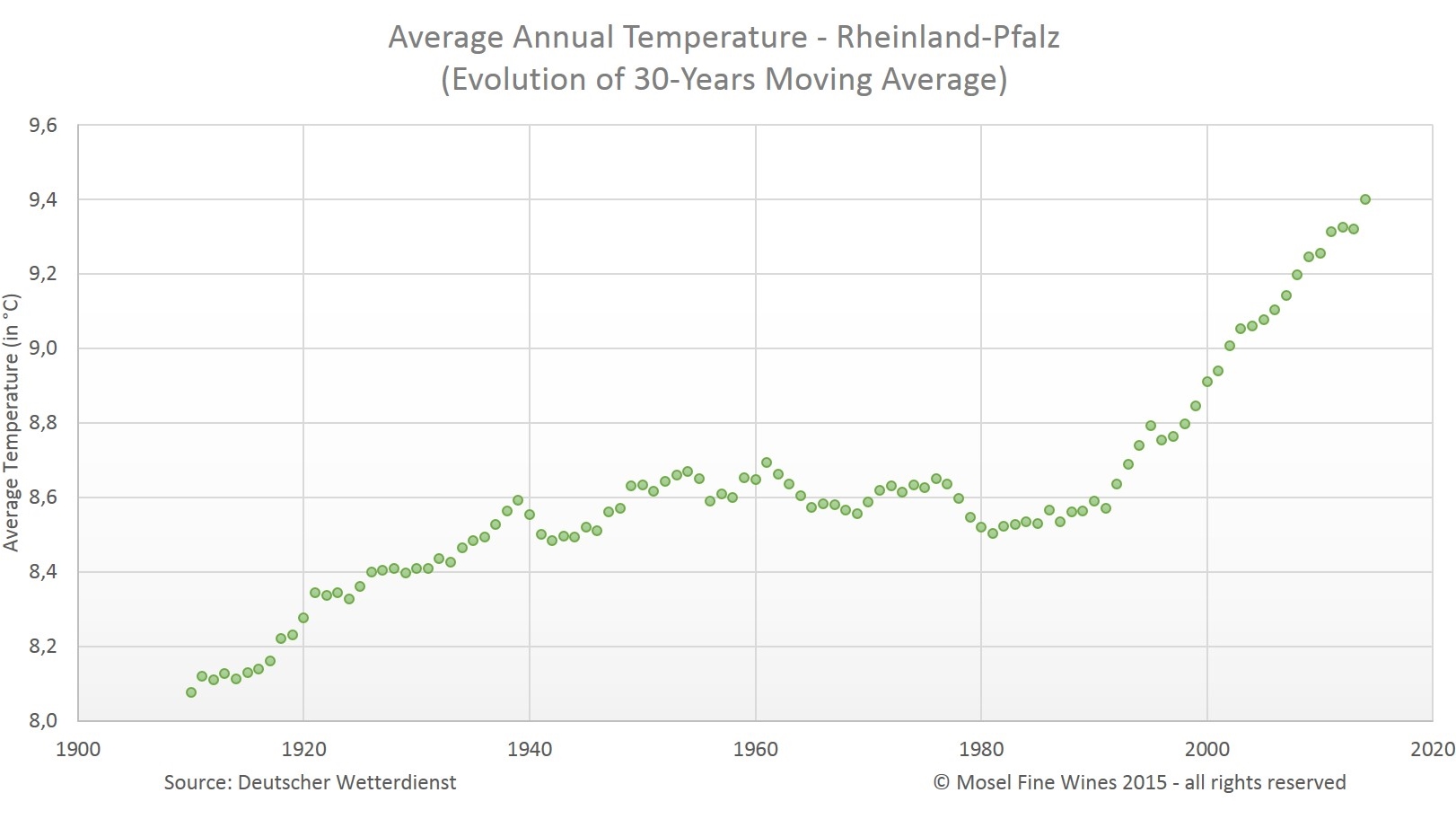 Winemaking in the Age of Climate Change

The above chart with the evolution of average temperatures says it all. How are winemakers tackling this formidable challenge? Five main levers emerged from our discussions.

A picture is worth more than a thousand words and confirms what winemakers and wine lovers have known all along: There has not been a “bad” vintage since 1987 (2000 and 1991 were less ideal but both still had ripeness and sugar levels far above the average of previous decades). What has changed is that the long-term average temperature has shot up since the early 1990s.

We asked a few winemakers about the evolution over the last 30 years. Their input is staggering and completely counter-intuitive. In essence, the increase in temperatures has the pernicious effect of reducing yields and increasing the spreading of rot. This may sound counter-intuitive as one would typically associate “better weather” with “plenty” and “clean”. But in the end, it is all about the harvesting window.

In the new climatic conditions, grapes tend to ripen faster and have already thin skins by September. If there is rain in September (and more often than not, there is rain), the grapes then soak up this rain and the thin skin bursts under the pressure. This then unavoidably leads to rot spreading (if the rain persists as in 2014) or to the juice evaporating as the grapes shrivel on the vines (as in 2012 or 2011).

As a result, the window for harvesting clean fruit becomes much smaller, as winemakers need to catch the grapes before the shriveling or before the rain. As most winemakers told us, “in 2014, we had probably a window of days rather than weeks for selecting the clean fruit for Kabinett and Spätlese”. The alternative was to discard anything which was not 100% clean, but this came at significant losses, as winemakers such as Daniel Vollenweider experienced.

A Change in Winemaking Thinking

This change in weather conditions has been going on for more than two decades now. We asked a few winemakers on how they tackle the climate challenge and five main “counter-measures” emerged from our discussions.

Change #1 | A Move to Cooler Sites

Many winemakers have systematically invested in cooler sites, be it by going uphill (e.g. Weingut Dr. Loosen in Graach), deeper into side valleys (e.g. Weingut Andreas Adam in Dhron), towards more east or north-facing vineyards or "going Saar", as Markus Molitor did for instance in Ockfen.

As we reported last year in our detailed reviews of the 2013 vintage, Markus Molitor saw the basis of his success in 2013 in his 40-man strong team which he could deploy to bring in the harvest quickly. From all parts of the Mosel, Saar and Ruwer, we heard winemakers say that, after the challenging 2014 vintage, they will increase the size of their harvest teams in order to be able to maximize the use of the perfect harvesting days. For many Estates, this is paired with an increase in pressing capabilities in the cellar (as this sometimes proved a bottleneck in 2014).

Many winemakers readily admitted to us that they got the timing for their harvest wrong in 2014: “We should have started at the end of September, but the fruit did not seem perfectly ripe so we waited. We did the same error in other vintages as well.” Christian Vogt, from the Weingut Karthäuserhof, goes a step further and says that the biggest issue is freshness: “Our wines live from the liveliness and freshness of their aromatics. While over-ripeness may be good for some elusive BA and TBA, it makes dry wines, Kabinett and Spätlese unnecessarily heavy.” He started to bring forward his harvest date over the last few years and his wines were very well received over the last years, by us as well as by other wine critics.

Change #4 | A Return to Fermentation with Ambient Yeasts

This is probably the most controversial of the suggestions made to us. But it is one which we have heard from different winemakers: “Wines fermented with ambient yeasts show less alcohol”. Christian Vogt, who is also using this in his quest for freshness and lightness, explained this as follows: “In fermentations with ambient yeasts, there are all sorts of yeasts at play, which de facto nourish themselves on the sugar and produce other byproducts of fermentation including the Hydrogen Sulfites often associated with spontaneous fermentations. Once the alcoholic fermentation kicks in, the Saccharomyces Cerevisiae yeast takes over and other yeasts are killed.” There is actually quite some research around this avenue to come to grip with higher sugar levels.

Auslese (as in Auslese, Beerenauslese and Trockenbeerenauslese) is the German word for selection. German winemakers have historically used Auslese to pick over-ripe, often botrytis affected grapes with sugar levels and make rare and elusive sweet wines. Nowadays, winemakers regularly mention to us the reverse: They need to make selections (Auslese) in order to get the clean (i.e. botrytis-free) and almost green grapes for their fresh and light wines such as Kabinett or dry wines. Konstantin Weiser and Alexandra Künstler, from the Weingut Weiser-Künstler, are among them: “Every year, we almost spend as much time selecting the fruit for our Kabinett as for our Auslese!”

These five measures are not alone and others were mentioned, among which canopy management, etc. It is clear that all winemakers are still in the process of adapting their thinking and that this is only work in progress. One thing is however sure: The old days and ways are truly over.

This is an extract of a fully detailed article published in the Mosel Fine Wines Issue No 28 (June 2015).
You are a subscriber and miss this Issue? Simply send us a request by email and we will be happy to send you a copy.
You are not yet a subscriber and wish to get this Issue? Subscribe free of charge by registering yourself here below and ask us for a copy by email.

Get the full article "Winemaking in the age of climate change" >>>